Eight million Egyptians signed up for the newly soft launched Egyptian Knowledge Bank on its first day of operation on Saturday, 9th January 2016, ahead of a full launch on 23rd January 2016. 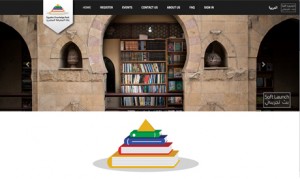 The Egyptian Knowledge Bank (EKB) is touted as the “biggest digital library in the world”, hosting content from prominent publishing houses from across the globe.

“This EKB is designed in a way that all factions of society with various specializations and interests and ages should benefit from, in order to develop scientific research for researchers, human knowledge for youth, promote teaching methods for teachers and develop ways to attract students to learn. The EKB is Egypt’s spring on the path of progress and global competition in the age of science and information.” said a statement that was released after Egyptian President Sisi’s live television announcement of the Egyptian Knowledge Bank launch. [Egyptian Streets]

The announcement came as Egyptian President Sisi declared 2016 the “year of the Egyptian youth” during a launch ceremony for the EKB held at the Cairo Opera House.